The local climate is low arctic with a mean annual temperature of -1.4 °C and a mean annual precipitation of 752 mm (1961-90). The drainage basin is situated in an alpine landscape with mountains rising up to 1400 meter above sea level and with glacier coverage of approximately 2 square kilometres. Geologically, the area is homogenous with Precambrium gneisses as basement throughout the drainage basin. A well defined river cross profile near the mouth of the local river enables easy measurements of drainage basin output, while the high mountains in the area allows for easy installation of digital cameras for snow cover monitoring. The terrestrial setting is diverse and includes the most typical vegetation types of a low arctic ecosystem within a very confined area. The area is well suited for monitoring the seasonal and inter-annual dynamics, carbon balance, biodiversity, zonal migration and structural and functional changes of terrestrial and freshwater communities. See more on Kobbefjord geology

In the fjord, the upper approximately 15 m of the water masses is affected by freshwater input from the local rivers during spring and summer. In the photic zone, the sea-bottom is characterised by a high diversity of fauna. Well oxygenated bottom waters are present in the fjord but, low oxic conditions can occur locally in bays with low water exchange. In the deeper parts of the fjord oxygen penetrates approximately 1 cm into the sea bottom during winter, but only a few mm during summer.

A field station with accommodation facilities for eight persons is located in the drainage basin at Kobbefjord to support Nuuk Basic staff and visiting scientists.

Transport between Nuuk and the study site in Kobbefjord is made by boat two to three times per week during the snow free season (ca. May – October).

The Greenland Institute of Natural Resources in Nuuk accommodates visiting scientists, and may provide office and laboratory facilities for programme staff and others. 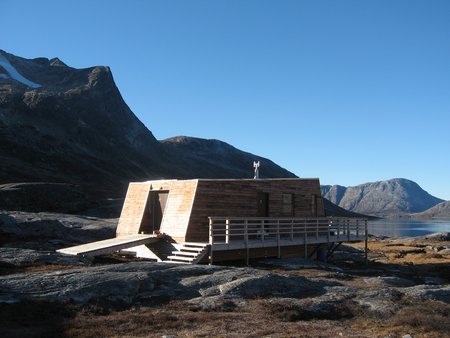 Transport between Nuuk and the study site is accomplished with the programmes own speed boat which during the most intense field season, June – August, secures transport from Nuuk to Kobbefjord two to three times per week at approximately 8:00 and transport back to Nuuk at approximately 16:00.

The Greenland Institute of Natural Resources in Nuuk will accommodate scientists during longer campaigns, and will provide office and laboratory facilities for programme staff and visiting scientists.