The title of this article recently published in the GEM Annual Report cards 2019 might seem bold, however, Johnna Holding, Mikael Sejr and colleagues have been studying primary production by phytoplankton in fjords around Greenland for the past several years. They find that, indeed, the site of the MarineBasis monitoring programme in Young Sound appears to be one of the least, if not the least, productive fjord in Greenland (not that it is a competition!)

Several features in Young Sound allow for this fjord to be particularly low productive. First, as it is located so far north, the growing season in Young Sound is very short. Sea ice tends to break up around mid-July (Figure 2) and a short-lived algal bloom follows (Figure 1). Second, Young Sound is situated on the East Coast of Greenland and influenced by the notoriously low nutrient concentrations from the East Greenland Current. And Finally, Young Sound is influenced by freshwater run-off from the Greenland Ice Sheet. However, this freshwater influence come in by way of several glacial rivers connected to the Ice Sheet, or land-terminating glaciers rather than marine-terminating glaciers, as are many of the high productivity fjords in West Greenland.

Marine-terminating glacial fjords have potential for higher primary production due to less dense and buoyant meltwater rising to the surface at the glacier front bringing up deep waters from below that are replete with nutrients necessary for phytoplankton growth. As glaciers retreat, however land-terminating glaciers are becoming more prevalent and this important mechanism mixing nutrients into the upper water column will be lost. In Young Sound, freshwater enters directly to the surface of the fjords and strongly stratifies the water column, dampening other external mixing mechanisms from bring up nutrients from below. Also, the run-off introduces suspended sediment and glacial flour that cloud the water and limit light availability for phytoplankton.

Not all is bad news for Young Sound however, while the primary production is low throughout the year, it is also very constant, even well into the fall when light is reduced to a quarter of its levels during the spring and the sun angle is low (Figure 2). In West Greenland fjords, when light decreases this much, there is a corresponding drop in primary production. This, suggests that the plankton community in Young Sound is well adapted to low light conditions. 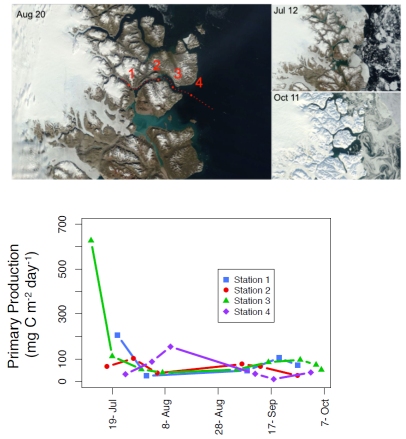 Figure 2. Average (2004-2014) daily sunlight radiation (green curve)––termed PAR in Young Sound over one year (a). White horizontal bars show ice cover dates for the years 2004-2014 (a). Actual PAR per year during the ice-free season (b). PAR data are taken from the Greenland Ecosystem Monitoring (GEM) database, and ice cover is estimated from daily photos taken from a camera situated on land approximately looking down on Station 3 (n.b. ice break up at other main stations likely occurred on different dates). Figure reproduced from Holding et al. (2019)

Based on results from the following research article: