Flying altitude was approx. 6600 feet with a speed of 277 km/h resulting in a pixel size of 4-5 metres. Overlaps between lines were approximately 20%.


The acquired strips are shown below: 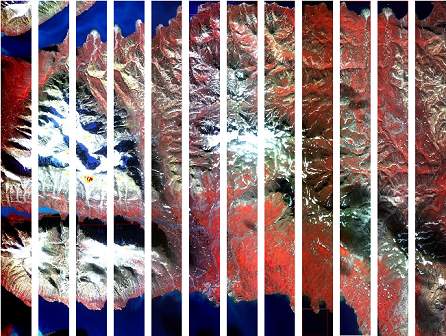 Strips are numbered from 13 to 24, left to right. Zackenberg valley is in the lower-mid part of the area just east of the snow-covered Zackenberg.

The text below is mainly from the report of Tukiainen describing the entire MINEO campaign. The full report is cited:

The HyMap scanner, built by Integrated Spectronics Inc of Sydney, Australia, has four spectrometers in the interval 0.45 to 2.45 nanometres excluding the two major atmospheric water absorption windows. The bandwidths are not constant, but vary between 15 and 18 nanometres. The scanner also has an on-board bright source calibration system, which is used to monitor the stability of the signal. The signal/noise ratio measured outside the aircraft with a sun angle of 30° and a 50% reflectance standard is more than 500/1 except near the major atmospheric water absorption bands. The scanner is mounted on a hydraulically actuated Zeiss-Jena SM 2000 stabilised platform. The platform provides +/- 5 degrees of pitch and roll correction. The yaw can be offset by +/- 20 degrees with +/- 8 degrees of stabilisation. The platform provides a residual error in nadir pointing of less than 1 degree and reduces aircraft motion effects by a factor ranging from 10:1 to 30:1. 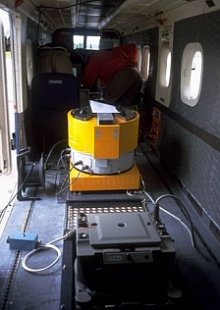 The HyMap scanner installed in the Dornier 228.


Geolocation and image geocoding is achieved with DGPS and an integrated IMU (inertial monitoring unit):


The differential GPS is applying an Omnistar service that updates its readings every second and allows interpolation to ten readings per second.


The Inertial Monitoring Unit (IMU) samples at the frequency of the GPS, i.e. ten samples per second.


The data generated by the spectrometer system (approximately 2.5 MB per second) was recorded on Mammoth 8900 Exabyte tapes. The scanner was spectrally and radiometrically calibrated by Terry Cocks, HyVista Corporation, at the beginning of the survey in Oberpfaffenhofen. The spectrometer system worked well throughout the entire survey programme.

Aerial photography
A Zeiss-RMK A 15/23 aerial camera was installed by the aircraft operator. 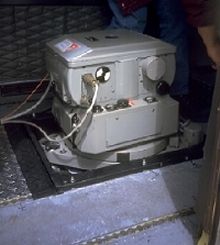 The system was set up with the following specifications:
- Zeiss AS 2 suspension mounts, remotely controlled drift and pitch compensation.